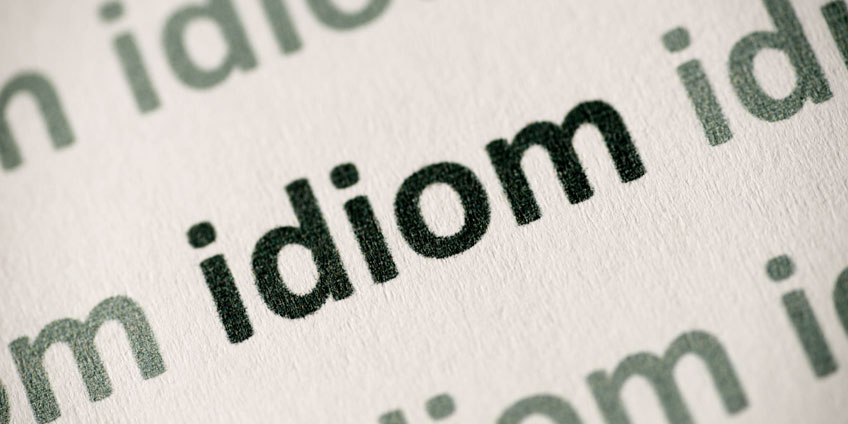 Have you ever watched a TV-show or talked to the English native-speaker and thought: “Wow, what is that even supposed to mean? I did not see that coming!” By “that” we mean a phrase, a word-combination which seems clear when you chop it into words, you know the meanings of these words! However, when you put them back together, it`s all just ridiculous and obscure. Idioms are a golden treasury of every language. And only if you use them in abundance in your daily conversations and essays, you may actually sound like a native speaker.

Studying idioms is one of the most complicated, yet interesting and fascinating parts of learning a foreign language. It seems that when you dive into this vocabulary world, you can see the full-blossomed beauty of the mother tongue of a certain nation. Besides, idioms help us understand the mentality of people and their history better. Some of those tricky word-combinations remain a mystery and linguists find them so fascinating that they may study one idiom for years.

For example, a phrase which will make absolutely no sense if you translate it into your language “it’s raining cats and dogs”. Many and many pages of scientific research were written with the purpose to solve the mystery of this idiom`s origin. And we still have only suggestions and no proof. The best way to study these word-combinations is by putting them into the context. The true meaning may be even guessed intuitively.

We know how tough writing essays in English can be. What is more, you`ve probably spent too much time looking for the words and idioms to sound like a native speaker. In this case, it`s just absolutely wonderful that you`ve come across this article because we just happen to know an awesome website that will provide great college essays for you.

It`s a Piece of Cake

You may use it in a situation which can be described as an easy one, a low-maintenance event. For example, when you see the questions of your test and you know practically all the right answers, you may say that the exam was a piece of cake. Apparently, a person who has come up with this idiom long-long time ago had no idea how to cook a cake and, for some reason, was sure it was easy. I`ll tell you what, it`s just not.

Here you go, now you know the meaning of this idiom! It`s actually “here you go”. It has a similar meaning to “it`s a piece of cake” (and we hope you haven`t forgotten that one yet). It`s hard to say who was Bob and why he appeared to be your uncle from all of the sudden. Perhaps, you`d like to write an essay about this family reunion. How do you use it in a sentence? “If you need to get to the downtown, you just turn left, and Bob`s your uncle, you`re there!”

Blue in the Face

This is a phrase that should be a part of the basic daily vocabulary of every student on this planet. No, it`s not about drinking or the morning after drinking. It`s about an utter exhaustion and enormous fatigue. Sounds like a student lifestyle to you? When you have tons of homework that you need to submit, but you have a party on Friday, you may say something like this: “I will be working till I`m blue in the face, but I`ll manage to do it all in time”. No matter how tired you`re going to be, you`re still determined to pull it off. Or you may not go to the extremes when you`re blue in the face, but just address a reliable service which you may ask “write my essay”.

As Cool as a Cucumber

This word should also be familiar to every student because none of them are as cool as cucumbers. So who is a person who somehow resembles this vegetable? It`s a chill, laid-back, low-maintenance dude or a girl who is super stress-resistant. What did I tell you? The stress-resistant part definitely doesn`t describe students. If you want to complement a person, you can call him/her that. But remember that this is an informal style of communication, so your professor won`t be thrilled if you say that he`s as cool as a cucumber.

Heart in Your Mouth

Sounds like a very inhumane torture of the Medieval times, yet again, it can be easily applied to the everyday life of a student community. When you`re scared, terrified or just extremely nervous and anxious, you can say that you have a heart in your mouth. Those who study anatomy may highly disagree with the possibility of such a physical condition, but it`s just a metaphor after all. It`s like your heart is going to jump out of your chest, but it chooses an escape route through the mouth.

Dead as a Doornail

Sadly, this idiom represents the actual death of any creature. It`s hard to think of a situation where you can actually use this phrase. You won`t say that your neighbor, for example, is as dead as a doornail, this is just disrespectful. Unless somebody starts questioning his death, then go on and use it. This idiom is very old. Linguistics has managed to trace its usage back to the 14th century. Even Shakespeare loved this phrase, you can spot it in a handful of his works. Besides the actual decease, it can also mean something absolutely useless and inapplicable.

A Storm in a Teacup

Now, try to picture such a storm. Does it look scary? How did a storm get into a teacup in the first place? The only explanation is if you got too excited with the teaspoon and now the beverage is all over the table. Anyway, a storm in a cup doesn`t seem too scary, right? It means that there some fuss or hype being created around a situation or event of a little importance. For example, a news story about Jennifer Aniston`s divorce was just a storm in a cup.

Hold your thoughts, you nasty. It may have about a dozen different meanings which all will derive from the youth`s slang, but we are serious people here. At least, we hope you believe that. Come on! We actually help you with solving so many problems. It actually means to abandon a place or leave a person very quickly, being in a hurry. People do a runner when they don`t want to pay for their burger.

Thinking on Your Feet

This one is confusing. What is the first association that pops up in your head when you hear this phrase? Well, it turns out that the best way to apply it is while describing a situation when you have to make a really quick decision or give an answer in a rush without having a chance to think it through. Yet again, the most relatable exam situation, isn`t it? You can say that you didn`t know how to answer the professor`s question so you had to think on your feet.

As a Screen Door on a Submarine

The original version is a bit longer, we just didn`t want to scare you away with it. When some situation is absolutely ridiculous, you can say that it makes as much sense as a screen door on a submarine. Because it doesn`t. Actually, getting the metaphorical meaning of an idiom becomes much simpler if you just try to imagine the situation, no matter how vague and unrealistic the picture turns out to be. For example, can you imagine flying pigs? So the idiom “when the pigs fly” will mean “something that will never ever happen”. Use your imagination and memory, of course, because we hope you have remembered all of these.