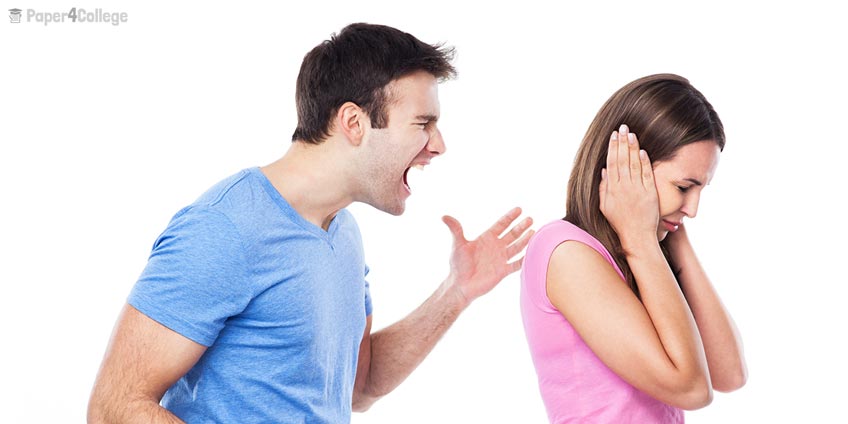 When you begin living with somebody, you can come across with various challenges and problems. Most of them are connected with social factor and have psychological background. During the life, we have to live at first with our parents, and then it comes the stage of living with neighbors in a dormitory. From the first glance, you can think that such life in the surrounding of your peers will have only positive sides, however, at the end, it becomes clear that common living on a small area with somebody, even of your age, disguises pitfalls under the vail of permanent amusement - an image which is carefully created by American youth films about college.

To write on the types of conflicts, we should identify what a conflict actually is. The conflict implies different kinds of disagreement that can arise between a couple of people and among diverse social groups that can have, common for all conflicts, such features as hostility and antagonism. The nature of every conflict lies in the difference among characters, beliefs, persuasions, religions, and views at the same things. Sociology points out four main types of conflicts:

Now let's narrow to the different types of conflicts and their reasons in the dormitory due to the neighbors. 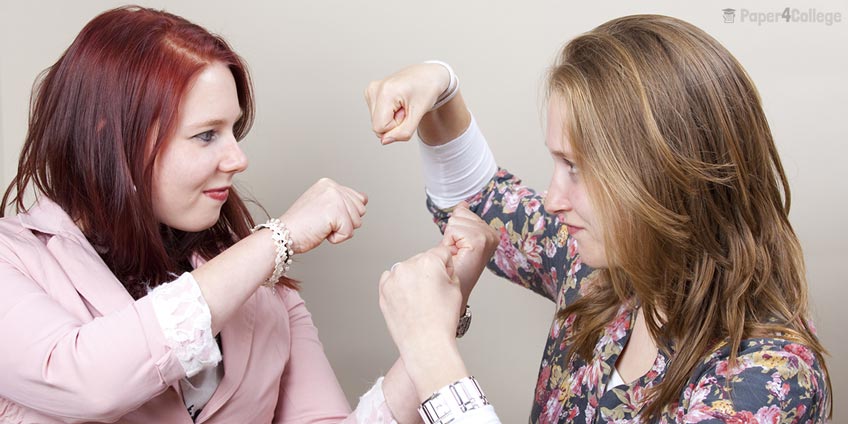 Cleanness in the Room

There are two extremities. The roommate or you can be a slob or a neat freak, which both are bad qualities for living together with somebody else. Of course, it can happen when two piggy wiggy live in one room and fully understand each other regarding not washed for the third day dishes or disgusting stink in the room. But more often two students with opposite views on cleanness are settled together. For example, I was pure neat freak, when my neighbor was rather a slob, despite the fact she was a girl. We had permanent conflicts on the basis of her clothes that I could find in my wardrobe or sweetie papers all around the room, etc.

You cannot deny that we all have different phases of sleep. Some are "owls", others are "early birds." In the dormitory at times it is rather hard to line with with neighbors. There are people that are not able to sleep with light in room or those for which it is a real problem to fall asleep without background noise (turned on music or TV serial on notebook). I remember from my own experience the situation when I was forced to work at night typing an essay for the morning at my computer. In the midnight silence, my neighbors and I heard every click and each keystroke (such trivial things under day light).

This problem is quite understandable, and I am sure that a half right now thinks that what bad can be in some guests. If someone is so introvert, then let s/he lives in a separate apartment. However, dear reader, I hope you say so because you've never come across with this problem as it is. When you coming home late and finds "a couple" just right in the middle of one "interesting process." Moreover, you were not even notified at least with sms. Such problem is a real issue which is under official consideration almost in every dormitory.

To get along with a neighbor in a dormitory means a lot for both of you. However, some individuals accept such good relation to them as the sign that you together are now "best friends." You can think, in general, positively regarding his/her traits, but in reality, their "best friends" for you is just "good comrades" or "not bad roommates." Attribution of such a status to the relationships between you two can lead to the unasked "borrowings" of various things, beginning from a hairbrush and ending with your clothes.

We all are very complex personalities with absolutely miscellaneous interests and hobbies. But when our leisure pursuit affects interests of our dormmate, negative results as common annoyance and misunderstanding are observed. Such hobbies can include, for example: Music instruments playing, work at lathe tool, or poems declamation. Of course, it sounds ridiculous, but, without jokes, I knew guy in the dormitory that was heavy animal lover and his pets (which were kept under his bed) included grass-snake, tarantula, and Madagascar cockroaches. See more.

The main reason of all conflicts is miscommunication that dramatically influences both participants of friction. In every particular situation, the solution is easy to come up with if we refer to the concept of mutual respect. When two roommates have a conflict the best variant is to sit together and tell slowly and patiently how every of them sees the compromise.

Dead end for both parties is to start complaining on each other to their friends without any attempt to change the situation and tell about your emotions instead of burdening other people with empty talks. In this case, things just will be getting worse.

One more option is to apply to dormitory stuff that will willingly mediate you to resolve the problem (or find a new roommate). However, not every student is ready for such a step because it means to announce that you have a problem. Usually, in a student environment that is the most unpopular method to cope with an issue.

Trying to adjust to each other and find a balance can help avoid conflicts in the future. Every roommate is responsible for the atmosphere in the dorm room. Being mindful, think that there is another person except of you, and trying to walk in his/her shoes when the tension appears can really breach a gap in the mutual relations.