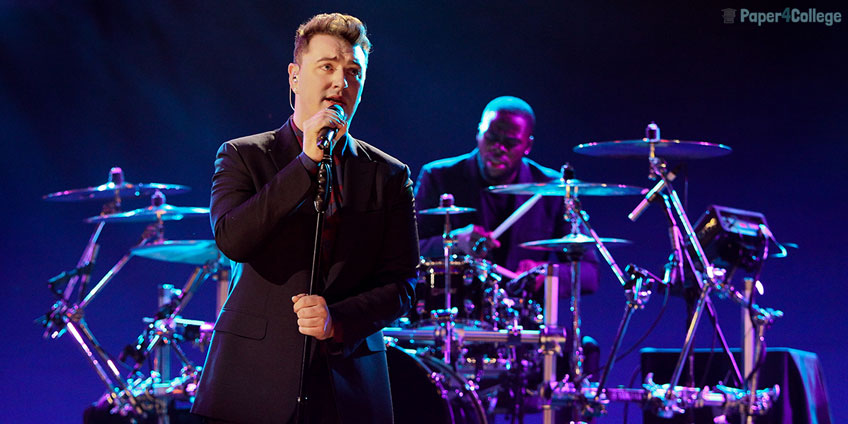 The Smiths are often regarded as one of the greatest English band of all time. For their fans, it seems that it is absolutely deservedly so, for those who are used to not having high regards for their artistry, this fact sometimes stirs amazement rather than appraisal.

One thing is for sure though: The Smiths succeeded in elaborating their own distinct sound and style, and they are able to tell more about their generation and Englishness on the whole than almost any other voice of their coevals. And that’s only one of the reasons for which we are indebted to them and admire them endlessly.

Yes, The Smiths are an English band to the marrow, and we’ll see why. But apart from direct British roots, they absorbed other influences as well: classic French cinema is perhaps the most obvious pick. As you remember, you can see the famous French actor Alain Delon on the cover of their most critically acclaimed record “The Queen is dead”.

American movies and cultural icons were also important to Morrisey (he was a diehard fan of James Dean).  That legacy, as well as this lyrical side that has something to do with some kind of retro sensitivity, are largely indebted to Morrisey, the frontman of the band, who was able to successfully implement numerous influences of different kinds, not only direct cultural trivia and archetypes, but also childhood memories or casual catchphrases.

English North and Its Impact

One of the most defining factors to The Smiths’ Britishness is, of course, their relatedness to the British North and everything connected with it. As far as we know, there are several things remarkable about the English North: the political stance, the working-class agenda, the important role of industries. Everything of this, to some degree, did found its expression, directly or not, in The Smiths’ oeuvre.

The Smiths are not about politics at all, but even though it wasn’t their true aim to carry some political message on purpose in their music, politics did leave an imprint on their songs. And in their turn, political moods were in correlation with the place that inspired them so much, so here we find a link with the previous point about the role of the English North.

Keeping in mind everything that defines the English North, no wonder that overwhelmingly leftist moods dominate in this part of the UK. If you remember some of the lyrics of The Smiths such as “England is mine and it owes me a living,” you’ll see that such a stance can be distinctly felt.

Of course, different people would single out different concepts or core notions around which main themes of the band spin. We have picked the following ones:

The feeling of loss is pervasive in Smiths’ oeuvre, and that’s not only about the loss of someone close (intimate side), but on a larger scale, it can be read as their commentary or standpoint about zeitgeist they were living in (England under Thatcher) and their dissatisfaction with the state of affairs.

Being depressed or mourning something or someone is the way for Morrissey to feel the world and admire it in its overwhelming fragility.

Remember the famous “How soon is now?” or “Rubber Ring” that testify extensively to this mood, covering the most morbid feelings without forgetting to add a touch of lyricism.

That’s related to the last one, of course, even if we take the same song “How soon is now?”.The Smiths tell us that yearning for love is natural, and it’s rude of anybody to damn such feelings.

Without a doubt, these concepts can be called some other way or overlap with other ideas, but you can understand the approximate picture now.

The Smiths are not only a valuable product of the British cultural export, but also representatives of a certain mindset, beautiful, sensitive, and witty. Their songs are reminders of one’s right to feel the way he or she wants, regardless of what other people, holders of normalcy, happen to think about it.

They were also an important phenomenon for introvert teenagers to cling to. They were constantly telling us that being “problematic” wasn’t deprived of some beauty of its own, and fleeing into one’s own inner world was not the worst decision, even if it implied sufferings, because then again, this might be human and beautiful.

The acts born at a specific time to testify to it its very nature and, on a larger scale, to the deep archetypes of the culture they stem from, are often no less than a marvel. That’s exactly the story with The Smiths, the band that embodies the heyday of British indie rock of the 80’s.

Not everybody can relate to the sour, though unbelievably lyrical mood that is pervasive in their songs, but let’s keep in mind that there are so many other things out there to love them for, and deep lyricism, elegant old-fashioned sentimentality and matchless wit are only an irresistible handful of them.